2020 proved to be an immensely challenging year, as the COVID-19 pandemic continued to unfold. Nevertheless, the United Nations Framework Convention on Climate Change (UNFCCC) continued to support Parties in developing their medium- and long-term commitments to zero greenhouse gas emissions and in assessing the impact of national climate responses.

At the latest since the „Paris Agreement“, the international agreement of Paris to limit global warming, a feverish search for alternative, emission-free and renewable energy sources has begun. An increasing energy demand, in the industrial and private sector alike, must be satisfied, due to growing living standards in Asia, the Indian Subcontinent and South America. The living standards of the Western European countries and the global mobility are at stake.

The agreement was adopted on December 12, 2015, at the UN Climate Change Conference in Paris by all parties to the UNFCCC, at the time 195 countries and the European Union, and provides for limiting man-made global warming to well below 2 °C above pre-industrial levels. The Paris conference was followed by numerous UN world climate summits, but real progress towards the goals agreed in Paris has been modest so far.

The experts at GTM GmbH GoToMarket Solution – a global network of scientists, technicians and economists – are currently pursuing various projects in the areas of Smart City, Mobility and Energy (see our blog for more information). Today, in this post, we take a look at the possibilities of hydrogen technology in the context of future mobility. We do not want to evaluate or promote one way or another, but merely look back what has been achieved so far, and compare. 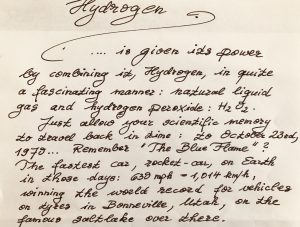 The EU’s recently lowered C02 Guidelines are having an Effect

In cities and municipalities, there is growing concern about the threat of being fined by the EU Commission. The search for emission-free technologies for buses, trains and other vehicles is in full swing, accelerating technical development. Electro Mobility based on battery technology is currently the clear focus, but other technologies are also being considered.

According to a study by management consultants Roland Berger, we can currently speak of a renaissance in hydrogen technology. According to the study, around 90 European cities are planning to invest 1.8 billion euros in this future technology over the next five years. Many city planners and the automotive industry had already given up on hydrogen after numerous experiments. 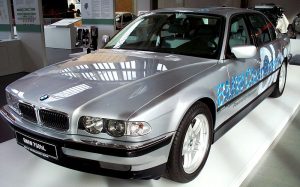 Today, another company in Munich, the Start-up Keyou, is developing a hydrogen burner. The company’s founders are convinced: „the hydrogen combustion engine is clearly superior to a fuel cell electric drive in terms of robustness, service life, manufacturing costs, a higher specific power density and less effort in cooling.“ The basis for Keyou’s engine is a 7.8-liter power unit from Deutz. Priority will be given to city buses with the converted Deutz engines. Use in urban bus transport would be a major contribution to zero-emission locomotion, as CO2 levels with this technology are less than one gram per Kilometer, i.e. almost CO2-free. The NOX pollutants released can be eliminated with exhaust gas aftertreatment.

However, is this Technology really a Solution for the Mobility of the Future?

There is hardly any other topic in the industry that is discussed as controversially as the chances of the fuel cell as an energy supplier for electric vehicles, or as an energy source for combustion engines.

Let’s take a closer Look at the Pros and Cons

A range of 400 to 500 kilometers is no problem for a fuel cell car. This requires a high-pressure tank with a capacity of four to five liters of hydrogen. The tank fits easily under the back seat or in the center tunnel of a passenger car.

Electric fuel cell trucks have one advantage over battery-powered electric trucks: the weight savings of the battery. In this case, it serves only as a range extender, for absorbing peak loads, as an energy storage device for energy recovery (recuperation) during braking, and for powering up the unit.

The fuel hose is docked and the refueling process is started by a customer card. Refueling takes three to five minutes. The Fuelcell driver doesn’t even have to go to the cashier, because the amount is debited from the card account directly at the pump. One kilogram costs 9.50 euros; a passenger car usually needs around four kilograms per fill-up. A number of hydrogen projects, such as production facilities for hydrogen and hydrogen technology companies and start-ups, are on their way in the Metropolitan Area Ruhr, particularly in the City of Essen, where RWE end Eon are headquartered.

Hydrogen is currently still a rather climate-damaging energy carrier: 90 percent is produced from fossil raw materials, for example by steam reforming natural gas or crude oil.

But there is also a largely climate-neutral form of production: electrolysis from green electricity. In this process, water molecules are split into hydrogen and oxygen with the help of a platinum catalyst and electrical energy. The hydrogen is collected and compressed. It can then be transported to the filling station.

There are currently just 60 hydrogen filling stations in Germany, most of which are operated by the start-up H2 Mobility. By comparison, there are around 10.000 charging stations for battery-electric cars and almost 15.000 gas and diesel stations for internal combustion engines.

Hydrogen only becomes liquid at minus 253 degrees Celsius. It can therefore only be stored and transported in stable and highly insulated pressurized tanks. A tank truck with a total weight of 40 tons can transport just three and a half tons of hydrogen, according to the gas company Linde. Moreover, the substance is volatile.

Hydrogen cars are only produced in very small series and are correspondingly expensive. Mercedes does not sell its F-Cell at all, but only offers it to selected customers on a leasing basis (around 800 euros/month). The Hyundai iX 35 Fuel Cell costs 65,000 euros, the Mirai from Toyota just under 80,000 euros. The technology could only become more affordable with higher volumes.

The gas is considered to be clean energy. However, it is explosive and therefore dangerous if used incorrectly. The assumption that it is basically a difficult element to handle may date back to 1937, when the „Hindenburg“ airship filled with hydrogen exploded.

Hydrogen is seen as the energy carrier of the future in road freight transport. However, the use of fuel cells and electric motors is more likely here. It seems simpler to burn the hydrogen in a gasoline engine like conventional gasoline.

„With the development and international distribution of hydrogen technologies, we have a huge opportunity, on the one hand, to secure our competitiveness and, on the other hand, to combine it with our responsibility for a sustainable economy,“ Research Minister Anja Karliczek (CDU) told Handelsblatt.

The 16 projects involve 71 partners. The projects are winners of the „Hydrogen Republic of Germany“ ideas competition. More than 100 other projects are currently being evaluated for a second round of funding in the competition.

The German government is giving high priority to establishing the complete value chain for the production, distribution and use of green hydrogen. Green hydrogen – in contrast to blue hydrogen – is hydrogen that is produced using renewable energies. Green hydrogen is seen as the key to phasing out the burning of fossil fuels in industrial processes, but also in heavy-duty and air transport. Companies in the steel or chemical industries will need large quantities of green hydrogen in the coming years to become climate-neutral.

Industrialized countries invest massively in the development of  an integrated hydrogen infrastructure.

„We are currently experiencing a global race to find the best ideas, and everyone is eager to be the first to launch such technology”, says Stefan Kaufmann, the German government’s hydrogen commissioner. With the new projects on basic research, the research ministry is setting an important course in this strategically highly relevant area. The measures have met with both praise and criticism: Uwe Cantner, chairman of the Expert Commission for Research and Innovation (EFI), for example, recommends that the measures „also be extended to passenger car traffic instead of unilaterally prioritizing electro mobility”.

The fact, that e-cars do not blow exhaust gases into the air, is not enough, he says, as long the production of batteries in particular is very harmful to the environment. It is therefore important to reduce the environmental impact of e-mobility, and, at the same time, to promote hydrogen as an alternative for transport, according to the expert.