In our recent Blog Posts we largely reflected upon water, the most precious resource of our planet Earth. Since any life is impossible without water, we should treat our water resources with utmost care, and, always be aware of the following important facts: the more we waste and pollute the water resources of our planet, the closer we drive the fragile balance of the natural forces to final collapse. Our carelessness is progressively busy to destroy the biodiversity of all living beings, and, as a consequence, global pollution has already reached a threatening peak where the natural purification forces are overcharged. Neither do we need a scientific diploma, nor a business degree to understand the simple fact that we should put an immediate end to follow this road of destruction. As a matter of fact, since we have proceeded so far up until now, we do jeopardise the existence of mankind, and, of course, that of all carbon-based beings on our planet.

We identify as major pollutants to be mass production, our throw-away mentality, and also our industrial activities in general, as well as excessive agriculture, and, to some extent, our leisure activities on top of this. Plastic waste undoubtedly is one of the top pollutants. Water, coastlines and submarine life are continuously exposed to contamination. And, moreover, the danger of plastic waste becomes more and more harmful the longer it stays in the water: slowly but steadily, plastic breaks up into smaller pieces, then transforms into micro plastic, and, finally into nano plastic. In such a “refined” state, nano plastic is a major threat to our health, because it can penetrate our skin and enter the blood systems and brain cells of animals and human beings alike.

TED Magazine, a tech media outlet, recently published an interview with entrepreneur Andrew Forrest, offering a simple but amazing solution. Listen to TED Talks and think about what Andrew Forrest presents as simple and viable solution to a big problem:

Germany is certainly not No.1 in the digitisation of industrial processes, fast internet connectivity or sleek administration, but in the case of plastic and metal recycling, this country seems to pioneer. In Germany plastic bottles have a direct value to consumers. People collect plastic bottles, take them back to the supermarket and trade in for a voucher, and, spend that on their next shopping. A pretty smart idea, and a very efficient idea as well. You see very little plastic waste in the streets of Germany. In city parks, in forests, and also in the streets, you can often observe people picking up and collecting plastic bottles.

The Mediterranean Sea – Overfishing, Bottom Trawling and Tons of Trash

An estimate of 1,000 and 3,000 metric tons of plastic are floating in the Mediterranean Sea, according to a recent study by researchers from the University of Cádiz in Spain. “The Mediterranean shows one of the highest levels of plastic pollution in the world,” states Andrés Cózar, the leader of the study.

Densely populated coasts, mass tourism and maritime traffic are responsible for most of the plastic floating in water. Plastic accounts for up to 95 percent of the trash collected on coastlines, the ocean surface and sea floor, according to the United Nations Environment Program. Even in the deepest and darkest areas of the sea, pieces of plastic and micro plastic can be found.

The degree of pollution even alarmed the business community. Coca-Cola, the largest beverage company in the world, announced that its consumer packaging will be entirely recyclable in the next seven years. Sky, a European media outlet, launched the Sky Ocean Rescue campaign, with the educational aim to open awareness to the public of how far ocean plastic pollution has already proceeded. There remains the one and only insuppressible question: Will all these promises and ambitious targets provide real and efficient solutions to the problem?

Enthusiastic solutions take time. Overfishing, bottom trawling and plastic pollution are unlike to disappear in a single day. In addition, all promises and activities will end up in nothing as long as the political action by the national governments and the European Union is tremendously poor.

The Mediterranean Sea – A Hotspot for Plastic Pollution

Hellenic Centre for Marine Research (HCMR) comes to essentially the same frightening conclusions as the researchers at the University of Cadiz. Various studies by the Greek researchers reveal how much plastic waste ends up in the Mediterranean Sea every year, and how much of it stays there. About 15 percent of plastic waste alone sinks to the bottom of the sea, down there, appearing almost invisible. The huge mass of the waste, however, ends up directly before our very eyes, along the coastlines, on the beaches or just floating on the surface.

Last but not least, due to unfavourable geographical conditions of the Mediterranean Sea, any exchange of water between the inland sea and the Atlantic Ocean is comparatively insufficient.

Shopping bags, water bottles, Styrofoam, micro particles…. This is a „shocking amount,“ as scientists from the Hellenic Centre for Marine Research (HCMR) write about their findings presented in the journal Frontiers in Marine Science.

The Spreading of Plastic in the Oceans can only be Estimated

Worldwide, more than 250,000 tons of plastic waste are estimated to be floating in the oceans, according to researchers. , and, any figures to describe the plastic waste’s whereabouts show vague accuracy only. The unpredictable spreading of plastic waste is due to every move of the ocean. This is the reason why we can never rely on figures showing an exact location of the plastic waste, even though  pre-calculated with quite high a precision.

For example, while plastic bags float on the surface for a long time, other plastic pieces quickly sink down to the bottom. Some are ingested by marine organisms or break down into small and micro plastic pieces. In addition, wind, waves and currents drive the plastic over long and unforeseeable distances.

The Ocean Cleanup, a non-profit organisation, is developing and scaling technologies to rid the world’s oceans of plastic. The engineers, scientists and researchers of The Ocean Cleanup have developed an amazing  tool that visualises the trajectory of plastic pollution by the click of a button – the Plastic Tracker, a web application that lets you see how and where a piece of abandoned plastic can end up if improperly discarded on the ground. 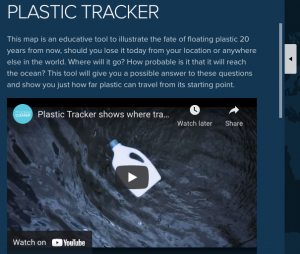