Rivers and the World´s Watersheds, Plastic Pollution is Omnipresent

In most of our blog posts in 2021, we had frequently emphasised that all the rivers on our planet play an immense role with reference to the water balance of our planet. Within the course of our research work we have come across highly significant research results: studies provided by the project group „The Ocean Cleanup“. The team, founded by the dedicated Dutch engineer Boyan Slat, has succeeded in researching and mapping the travelling route the plastic waste is carried by the currents starting from its point of origin: this is usually the location where it is discarded. Then, over the time, the plastic waste is taken into the ocean, where it is decomposed into micro-plastics. There, in the ocean, all plastic waste will remain as a major pollutant for many centuries to come. The findings are not only startling but also frightening. Nevertheless, let us start from the beginning and reflect upon the importance of our planets’s rivers to mankind.

Rivers play a major role in the history of mankind. Rivers are the lifelines of our planet. They are the backbone of our ecosystem and hotspots of biodiversity. They are the origin of advanced civilisations and myths alike.

The first ingenious and advanced civilisations that had existed already thousands of years ago, were only able to develop such sophistication, because they had been located alongside the river banks: in the Oriental Hemisphere, in the States of Mesopotamia between the Euphrates and Tigris; in North Africa, in the Empire of Egypt on both shores of the Nile; on the Indian subcontinent, within the Harappa culture along the Indus; in East Asia under Chinese Emperors, on the banks of the Yellow River and on those of the Yangtze Kiang.

Rivers have always been perfect traffic and transportation routes, and thus they have made trade and cultural exchange possible. They have regularly flooded the riverside landscapes, and, after having pulled back from the banks again, the rivers always left behind fertile farmland. Alongside the rivers, and especially at their mouths into the oceans, small villages developed into trading metropolises, and this way laid the foundation stone to a beginning prosperity.

Alongside the rivers their cities kept growing steadily because transportation for people and merchandise was assured, and, whatever was needed for making a living. Rivers connect and at the same time they mark borders.

Rivers were the first renewable resource of generating energy: as of ancient times already, man made use of water power and harnessed its force for driving mills and later for entire industrial plants.

It is utterly regrettable, at least for a minority of human individuals, that most of the planet’s population is mentally chained into a one-dimensional thinking pattern towards progress, and, last not least, imprisoned by their greed for profitable business alone.

In other words, any overall use and abuse of our rivers, such as for traffic, cooling, wastewater, just to name a few, has developed intensely and enormously, regardless of their global benign or malignant function and effect on our vital ecosystem.

Plastic Waste, from Rivers into Oceans

The plastic waste discarded into the oceans is mainly originally deposited into the rivers. The team of the project group „The Ocean Cleanup“ estimates that only about 1,000 rivers are responsible for 80% of the pollution of all oceans. The remaining 20% of this pollution originates from about 30,000 smaller rivers. If mankind concentrated on the main causes, viewing the 1,000 polluters, would this not be a big step forward on a long way yet to go?

There are ten rivers carrying by far the largest volume of plastic waste detected ever into the sea. This is a result of a comprehensive study published by researchers from the Helmholtz Centre for Environmental Research Leipzig and the Weihenstephan-Triesdorf University of Applied Sciences. The scientists evaluated all available data on the pollution of 1350 rivers worldwide. According to the scientists, the following is disclosed: „The pollution with plastic particles is scattered unevenly to an extreme extend.”

According to this study, only ten river systems transport around 90 percent of the plastic that is discharged from rivers into the sea each year. In the top ten charts of this disgrace, there are eight Asian waters represented. And, not to ignore, most of the plastic is washed into the oceans by the Yangtze River.

Despite these alarming results, some scientists are still hopeful: since some waters are responsible for the bulk of plastic waste, countermeasures are of particular efficiency here. If it were possible to reduce plastic waste discharge in each of the ten rivers by 50% only, this would mean an enormous relief for our oceans.

Rivers of all sizes shape the world’s watersheds, and together they comprise a “circulatory system” that pumps life into every corner of the globe. It is similar to the circulatory blood system of our human body, transporting blood and oxygen throughout our whole body.

This is particularly evident in a country like Egypt, which has been described by Greek historian Herodotus as the “Gift of the Nile”. In Egypt, an astonishing 95% of the population lives alongside the mighty Nile, who is the world’s longest river at 4,258 mi (6,853 km) and also the only major source of freshwater in an otherwise arid desert landscape.

The Amazon, aptly dubbed the “King of Rivers”, discharges far more water than any other river on Earth, dumping more water per second into the ocean than all of the next four largest rivers to follow in size. That makes the Amazon a clear winner in the category “richness of water”.

In terms of drainage area though, the Amazon is not as dominant as shown in the picture below: 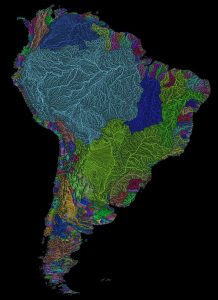 When Three Become One 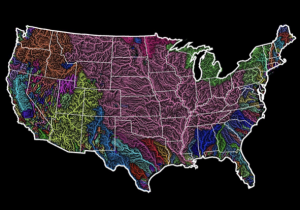 When it comes to drainage area, another river system is much more stunning and wide-spread: the by far largest drainage basin is the Jefferson-Mississippi-Missouri River system (shown in pink on the map above). This massive basin collects water from over 40% of the contiguous U.S., and comes into contact with two Canadian provinces and 31 states before terminating at the Gulf of Mexico.

Omnipresent, Plastic Particles in the Oceans

Coming back to our main concern when talking about water, we draw your attention, dear readers, to a warning published by the WWF:

In the next few decades, the amount of plastic in the world’s oceans could quadruple. Marine researchers and the WWF are warning of irreversible littering and a crossing of „ecological tipping points“.

According to a study by the environmental organisation WWF and the Alfred Wegener Institute, plastic pollution of the world’s oceans is now ubiquitous and assuming threatening proportions. Plastic particles are now found in all parts of the oceans, starting within „the smallest plankton up to within the largest whale,“ the study says. „Plastic pollution in the ocean is growing exponentially and will continue to increase,” as WWF warned in a statement.

According to the environmental organisation, the study is the most comprehensive meta-study to date on plastic pollution in the oceans. Ahead of the United Nations Environment Assembly (UNEA) in Nairobi, it makes clear „that a binding global agreement is needed to stop the irreversible littering of the world’s oceans before ecological tipping points are passed.“

„If governments, industry and society act now, jointly, fiercely and with immediate effect, they still have a chance to master the plastic crisis,“ states Heike Vesper, head of marine conservation at WWF Germany.

The environmental organisation warns of a „plastification“ of the world’s oceans. According to the report, marine areas sized two and a half times more than Greenland might exceed the thresholds ecologically risky for microplastic concentrations by the end of this century.

This forecast is reportedly based on a chain reaction: plastic production is expected to at least double by 2040. As a result, the larger macroplastic in the ocean will quadruple over the next 30 years. Over time, the plastic particles will break down into even smaller and tinier pieces, down into micro- and nanoplastics.

In some particularly hard-hit regions, such as the Mediterranean Sea, the Yellow Sea in Southeast China, the East China Sea and the Arctic Sea, microplastic concentrations have already exceeded the ecologically critical threshold, as the study reveals.

„The plastic penetration of the ocean is irreversible,“ WWF warns. „Once distributed in the ocean, plastic waste can hardly be retrieved. It is steadily decomposing, so the concentration of micro- and nanoplastics will continue to rise for decades.“ Therefore, tackling the causes of plastic pollution is much more effective than cleaning up the consequences, WWF says.

…and, the Conclusion is?

Sad situation… Nevertheless, mankind might still be given another chance, provided that action is taken now, consequently and with no delay. In our opinion, we have to tackle the problem from both ends: 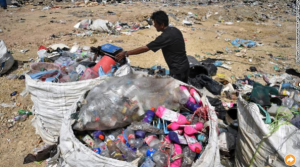