Small Hydropower – an Investment with High Return and Ecological Value

Small Hydropower – an Investment with High Return and Ecological Value

In our previous articles we reflected upon the importance of water for our life: Water is life, water is the basis of any economic activity, water is scarce, water is the most valuable resource on our planet. Unfortunately, water has long since fallen victim to an invincible economic greed.

Water will also constitute a future cause of already existing political conflicts.

Of course, many investors will be attracted to the water due to its enormous preciousness.

And, if these investors place their funds in various intelligent solutions, giving them ecological sense, this would even provide high returns.

In our May 3rd-2021 blog-post, „Water Wars”, we discussed about the potential environmental and political impact of mega dam projects. Whereas in today’s post, „Investing in Small Hydropower,“ we do not talk about such large projects. Here, we provide information about the advantages and disadvantages of “small hydropower”, using the energy of the running water in rivers. This kind of power plants require a comparatively small overall investment volume, and, are primarily interesting for private investors. Of course, several small hydropower plants can be connected to form a power grid. In this case, the financial volume is large enough to also attract institutional investors and investment companies.

Hydropower is the oldest natural energy source in the history of mankind, and has also long since proven to be a mature technology. The power of water has been used for thousands of years and is the oldest form to generate energy. People had used it long before the industrial revolution.

Moreover, the use of fossil fuels like coal, oil and gas was developed much later.

Even in pre-industrial times, hydropower was a source of energy and already of great importance and was therefore used to drive mills and sawmills.

Hydropower is quite an inexhaustible source and does not fluctuate in performance compared to other renewable energy sources, such as those from wind or sun. Water flows continuously, around the clock, and, any power generated by water is independent of the weather.

Hydropower is by far the most mature of renewable energies, and, highly essential for “system stability” and supply security of the energy sector. The stability of output secures the current energy demand (“base load”) much better than wind power, which may fluctuate from no wind to storm.

The first hydroelectric power plants had been built and operated as early as the end of the 19th century. Though, the power of wind was widely used also, and, famous are the windmills in the Netherlands and in the Spanish La Mancha.

Nevertheless, if so compared to the power of flowing water, wind power was by far inferior. The use of solar energy, another possible natural and renewable energy source, was discovered and then technologically implemented much later in time.

Running water is abundant on all continents, except for some extensive desert regions. Mountainous regions and areas with large differences in altitude offer ideal conditions for the use of hydropower. Scandinavia, the Alps and the Balkan countries offer perfect topographical conditions throughout Europe. All those gigantic, widely branched river courses of the African continent, and the gorges and canyons in North and South America and Canada, as well as numerous regions in China, India and Russia, are perfectly suitable for water to become an energy source.

With the ever faster growing demand for energy for industry and transportation, and the rising standard of living on all continents, hydropower is gaining importance and thus appears to be an indispensable pillar of an ecological energy production. Water, as a resource, plays a decisive role to meet future energy needs.

Energy companies and investors alike, have recognised this importance, and, hydropower is not missing in any Green Investment Offer.

The Advantages in Terms of Security and Return are Obvious

The hydropower technology is extremely durable. The average lifespan of a small hydropower plant is between 60 and 100 years, with many plants exceeding this statistical lifespan, provided that they are properly maintained, and, electromechanical parts also regularly replaced.

Especially in the small hydropower sector, important components such as turbines or generators can be operated for up to 60 years, regular and proper maintenance provided again. Even electronic equipment, such as control and supervision systems, can be updated permanently and require replacement after several decades only.

The Efficiency of Hydropower is Impressive

The high efficiency (ratio of energy output to energy input) of hydropower plants is impressive. 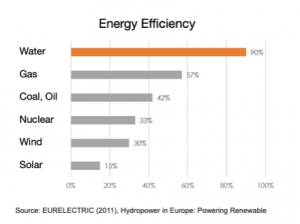 The energy efficiency of hydropower records an average level at 90%. Compared to other energy sources, hydropower is by far the most efficient technology.

What’s in Hydropower for the Private Investor?

In comparison to solar and wind energy, the initial investment volumes of small to medium-sized river hydropower plants are low. Modernisation intervals are long, hence, subsequent investments are minimal. As a result, the life cycle costs are relatively low, and, the residual values are relatively high. Altogether, this sums up to a high return on investment. This makes investments in hydropower particularly interesting for risk-conscious and return-oriented investors.

Ecological Footprint is Good Compared to Solar and Wind Energy

Hydropower plants use the renewable and CO2-free resource water to generate energy. This operation does not produce any harmful emissions. Structural interventions in nature are minimal.

The energy produced is mainly obtained from the difference in the distances (the head) between the weir and the powerhouse (drop height), where the turbines are located (amount of water x head x efficiency = energy produced). These small hydropower plants are usually located on small rivers and watercourses, where they are carefully embedded in nature.

This type of power plant therefore differs significantly from those of river power plants, which require large dam constructions on rivers with heavy water flows, forming extensive reservoirs and thus entailing far-reaching changes to the river landscape and biotopes.

Particularly in countries on the African continent or, e.g., in Albania and Turkey, the average quality of the inhabitants` lives can also be significantly improved by the construction of small hydropower plants. The often quite poorly developed electrical infrastructure leads to instability of the grids and thus to frequent power shortages and outages, especially in rural areas. Decentralised hydropower plants improve this situation, as the feed-in in remote areas contributes to grid stability and thus  improves local supply security. Negative effects, such as resettlement of people, or, of entire conglomerations, usually never occur with small hydropower, since large dams or reservoirs are not necessary.

Another socially positive effect of hydropower is achieved by awarding contracts to local companies for the construction and operation of the power plants.

Contribution to Sustainability in Line with the UN Sustainable Development Goals

Furthermore, investments in hydropower support some Sustainable Development Goals (SDGs), as defined by the UN: Goal 7, „Affordable and Clean Energy“, and Goal 9, „Industry, Innovation and Infrastructure“. In addition, hydropower contributes to Goal 11, „Sustainable Cities and Communities,“ as communities can be directly supplied with renewable electricity. Since all this results in a direct avoidance of CO2 emissions, hydropower also supports Goal 13, „Climate Action,“

Small and medium-sized hydropower plants do not harm the ecosystem, as they can be well integrated into individual landscapes, and, they are usually built in economically and ecologically favourable locations. 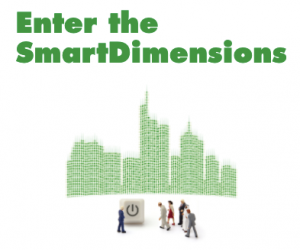 We at GTM, have made water – the most valuable resource of our planet Earth – to one of our number one topics. It is not our intention to judge or give recommendations, we just wish to encourage some new perspectives and innovative ways of thinking. First and foremost, we hope that the GTM Blog Posts act as discussion starters and provoke thought. Please share your perspective with us, feel free to comment and reach out.