The World of Rivers

Rivers play a major role in the history of mankind. Rivers are the lifelines of our planet. They are the backbone of our ecosystem and hotspots of biodiversity. They are the origin of advanced civilizations and myths alike.

Nevertheless, the composition of the water on our planet Earth is threatened by continuously increasing pollution. Rivers now belong to the most endangered habitats: covered with garbage and plastics, filled with chemicals, straightened, obstructed, and, in addition, life under water is systematically destroyed by human leisure activities. At the same time, the rivers are enormously important for biological diversity, for animals, and plants, and for us humans. They provide drinking water, water for food processing and for the construction industry. They are routes for transportation, they offer recreation and they serve as cultural and spiritual stimulation.

Anyway, before we speak about the extent of an ecological catastrophe, let us take a look at the history of mankind and which role our rivers play on our planet.

The Rivers – Basis for Advanced Civilizations, Trading Powers and Myths

The first great and advanced civilizations that existed already thousands of years ago, were only able to develop such sophistication, because they have been located alongside the river banks: in the Oriental Hemisphere, in the States of Mesopotamia between the Euphrates and Tigris; in North Africa, in the Empire of Egypt on both sides of the Nile; on the Indian subcontinent, within the Harappa culture along the Indus; in East Asia, in the Chinese Empires on the banks of the Yellow River and the Yangtze Kiang.

The reasons hereto are obvious: rivers have always been perfect traffic and transportation routes, and they have made trade and cultural exchange possible. They regularly flooded the riverside landscapes, then, the rivers pulled back from the banks and left behind fertile farmland. Along the rivers, and especially at their mouths into the oceans, trading metropolises and prosperity developed.

Cities were developing along the rivers because they could be used to transport people and merchandise, and, whatever was needed for making a living. Rivers connect and at the same time they mark borders.

Rivers were the first renewable resource of energy production: as of ancient times already, man made use of water power and harnessed its driving force for mills and later for entire industrial plants. Unfortunately, in a one-dimensional thinking pattern towards progress, as well as the greed of mankind for profit, the overall use of our rivers developed intensely and enormously, regardless of their global function for our ecosystem.

Rivers even play a major role in religious ideas: the Nile was worshipped as a God, and the Ganges today is still the holiest river for Hindus.

Myths find their origin in rivers. The Amazon, the largest river on earth, is just one example: Yacumama, a 60 meters long Anaconda, is the mother of all waters. She lives in the depths of the Amazon. When she rises out of the depth of her river, she causes earthquakes, dangerous swirls, explosive sounds…, and travelers on the river are even carried away.

The River – Victim of Greed and Stupidity Abuse of Mankind Itself

It is almost always not advisable to drink river water. For centuries, waste water from businesses and human households was discharged into oceans and rivers. Factories and industrialized farming abused the rivers as sewers and for waste disposal. Dirty water, poisonous substances and waste of all kinds impeded the self-purifying power of the rivers.

Although the construction of sewage treatment plants and the municipal monitoring of sewage have become generally accepted in Europe, the extent of the catastrophe is still worsening globally. Today, one can take a bath in the Isar River in Munich, or in the rivers of the Metropole Ruhr without any danger of being exposed to contamination. Contrary herein, the rivers of Asia, Africa or of the Indian subcontinent continue to be dangerously abused as waste disposal sites.

Plastic Waste – from the River into the Ocean

The plastic waste let into the oceans is mainly produced in the rivers. The team of the project group „The Ocean Cleanup“ estimates that only about 1,000 rivers are responsible for 80% of the pollution of all oceans. The remaining 20% of this pollution originates from about 30,000 smaller rivers. If mankind concentrated on the main causes, viewing the 1.000 polluters, this would already be a big step forward on a long way to go.

There are ten rivers carrying by far the most plastic waste into the sea. This is the result of a comprehensive study published by researchers from the Helmholtz Centre for Environmental Research Leipzig and the Weihenstephan-Triesdorf University of Applied Sciences. The scientists evaluated all available data on the pollution of 1350 rivers worldwide. According to the scientists, the following is disclosed: „The pollution with plastic particles is extremely unevenly scattered. According to this study, only ten river systems transport around 90 percent of the plastic that is discharged from rivers into the sea each year. In the top ten charts of this disgrace, there are eight Asian waters represented. Most of the plastic is washed into the oceans by the Yangtze River“.

The Yangtze, the longest river in Asia, flows from the Highlands of Tibet into the East China Sea, and passes through megacities like Chongqing and Shanghai.

In second place, there is the Indus River, which flows into the Arabian Sea in Pakistan, and, in third place, there is China’s Yellow River. The only non-Asian rivers in the list are the Nile and the Niger.

Despite these alarming results, some scientists are still hopeful: since some waters are responsible for the bulk of plastic waste, countermeasures are of particular efficiency here. If it were only possible to reduce plastic waste discharge in each of the ten rivers by 50%, this would mean an enormous relief for our oceans.

And the Conclusion is…?

This sounds encouraging, but it requires an international coordination of activities, which can only be achieved by a central power, which means:

Facts – the Biggest Rivers and the Worst Polluters

What looks like a garbage dump is actually the Yangtze River. Part of its garbage load remains on the banks of the river. Most of it flows into the ocean. 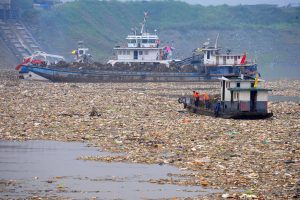 The Yangtze River is Asia’s largest and the third largest river in the world. The Yangtze River dumps the most plastic waste into the oceans, primarily into the East China Sea. 480 million people, which makes up almost one third of the Chinese population, live along the river.

The Indus is Pakistan’s most important river and with its 3180 kilometers the longest river on the Indian subcontinent. Along its way, recycling and sewage systems are unknown.

The „Cradle of Chinese Civilization“ is the third largest polluter. The water is no longer drinkable, more than 30 percent of the fish population has already disappeared.

In fourth place, there is another Chinese river, the Hai He. The Hai He connects two of the most populated cities; Tianjin and Beijing, and then flows into the Gulf of Bohai.

The Nile passes eleven countries until it flows into the Mediterranean Sea in Egypt. Around 360 million people live on the banks of the Nile.

The Ganges is of utmost importance for the people of India – because of the water and because of his spiritual influence. Wastewater and waste from agricultural and industrial production are discharged into the river without any previous filtration process.

China’s Pearl River continuously transports waste into the South China Sea between Hong Kong and Macau. The population is exploding, and, directly proportional, also its industrial waste and sewage.

The Amur or Heilong Jiang River is 2824 kilometers long, flowing through China and Russia, then into the northern Pacific. Here, too, pollution is a problem, although the Amur flows through remote regions.

The Niger is one of the most complex ecosystems in the world. It flows through five countries into the Atlantic Ocean. Regular oil spills have converted the Niger water into a largely toxic element.

The Mekong finally is among the biggest polluters. Approximately 20 million people live in the Mekong Delta, many of them are dependent on agriculture and fishing.