Water is life, water is the basis of any economic activity, water is scarce, water is the most valuable resource on the surface and deep down inside of our planet. Unfortunately, water has long since fallen victim to an invincible and detestable economic greed. Water will also constitute a future cause of already existing political conflicts.

Any prediction to future handling of water resources seems impossible, neither for two decades ahead from now, nor in a longer period of time. Judging from today’s perspective, not even professional scientists could tell with precision what should be done in order to limit climate warming and to ensure a safe and comfortable living for everybody. Many questions still remain unanswered: Is there enough clean and drinkable water for everybody? Is the water accessible for everybody, or just for a lucky few? How do we avoid political conflicts and water wars? How do we manage the water cycle in urban conglomerations and mega cities (also view our Post: “Importance of Water in Urban Municipalities”)

Some scientists suggest that the only true answer, in the end, is, to reduce mankind substantially. We have simply multiplied too fast without considering the impact on nature and also ignored our indifference towards our precious and limited natural resources.

Throughout the previous year up until now, we have largely reflected upon the element of “Water”, one of the most precious resources donated to us by Mother Earth. We even cast an eye beyond the borders of our planet and highlighted the current findings of the NASA and ESA Planet Mars Missions. In today’s Blog Post we take look at the impact of agriculture on the world’s water resources.

Ten Facts to Know about Water Consumption in Agriculture

As the world’s most important resource, water is also essential for agriculture. For our readers´ immediate information we have compiled some facts about the use of water (Sources: Umweltbundesamt = Federal Environment Agency, World Agricultural Report 2018).

Less than 1 percent of the Earth’s water supply, or 13,000 km³, are accessible and  renewable freshwater reserves. However, these are not evenly distributed across the planet. In some regions water appears plentiful, in other regions there is almost none.

Global water consumption is estimated to about 4,200 km³ per year, with agriculture being by far the largest consumer.

Water consumption has increased about twice as fast as the world population over the past 50 years.

In Germany and also in many European countries, water consumption is less than 25% in the agricultural sector (measured against total consumption). In other countries, such as Mexico and China, the share is 90% or more.

5. Regional Difference of Consumption in the Agricultural Sector

In Germany, 99% of the water used in agriculture is rainwater. In Southern countries, people tend to use well water for irrigation.

Virtual water was defined in 1997 by Professor Allan as the water “contained” in a product, understood not only as the physical amount actually within the product, but also as the amount of water required to generate it. It is a revolutionary concept because it describes something never conceptualised before: the water “embedded” in trade products. Thus, virtual water also helps us understand how virtual water flows between countries or regions.

In India or the Middle East, water scarcity can be reduced by importing agricultural products. In countries of Southern Europe, on the other hand, the export of a number of products increases the already existing shortage of this precious resource.

Nearly one third of the world’s population does not have access to reliably clean drinking water, as to a July 2017 UN published study. We speak about 2.1 billion people.

10. Water Stress on the Rise

How Much Water is in Agricultural Products?

Without water, there is no food. The amount of water needed for individual products depends on numerous factors – above all, on every individual location.

Each of us in Germany uses 123 litres or a full bathtub of water every day – for showering, cooking or drinking. However, this so-called direct water consumption is by no means the total amount of water we consume every day.

According to the Federal Environment Agency, more than 3,900 litres of water are used per capita every day. We consume this enormous amount of water indirectly through the consumption of goods from industry and agriculture. How is this possible? The reason is evident: every product we use or consume, contains so-called virtual water, water necessary to produce the product. This is a fact that also applies to our food.

The Water Footprint Network (WFN), a non-profit international network, has investigated how much water is needed to produce our food. The results vary widely from food to food.

But the quantities of water required alone do not say anything about the sustainability of production. What really matters ultimately is where the water comes from.

It makes a difference, where the water comes from. There are two sources of water in agriculture, called blue water or green water. Blue water comes from rivers and lakes or from groundwater. It is used to irrigate individual crops and water animals.

Green water includes natural precipitation such as rain or snow. The soil stores some of this precipitation and plants absorb water during the growing season. Unlike blue water, green water is constantly replenished naturally. Agriculture does not withdraw it from the natural cycle. This is why a high proportion of green water is advantageous for the water balance inside every food product, whereas a high proportion of blue water is rather unfavourable. This also puts the enormous water requirement of 15,400 litres for one kilogram of beef into perspective. This means that actually more than 90 per cent of water needed to produce one kilogram of beef is accounted for by green water.

Another important aspect to be considered is the fact that the amount of green water varies, each time depending on the climate zone. Unlike many other countries, Germany offers favourable climatic conditions for agriculture. With an average of 700 to 800 litres of precipitation per square meter, there is enough rainfall almost everywhere, so that farmers in Germany use green water almost exclusively. According to the German Farmers‘ Association, 99 per cent of the water used in agriculture is green water.

Only 2.2 per cent, approximately, of agricultural land is irrigated, according to the report mentioned before. German farmers use 1.3 per cent, precisely, of the blue water withdrawn nationwide only. This makes agriculture one of the economic sectors with the lowest demand for groundwater and surface water.

Globally, however, the picture is quite different. As the European Environment Agency states, agriculture accounts for 24 per cent of water withdrawals in Europe alone, and, also for as much as 70 per cent worldwide.

All over our planet, about 40 per cent of all our food origins from irrigated land, as the Food and Agriculture Organization (FAO) reports.

Obviously, the amount of water consumed is primarily a question of every individual location and its production conditions in each place. For example, according to the Water Footprint Network, wheat is produced most efficiently in Slovakia with 465 litres of water and most expensively in Somalia with 18,000 litres.

… and the Conclusion is…?

What do we put in our shopping basket? Regional or exotic products? Vegetable or meat? What is the impact on every country of origin?

The most decisive factor is not only whether we put vegetables or meat in our shopping baskets, but also as to where the products come from, and whether they had to be intensively irrigated at the point of production. So, when it comes to our daily grocery shopping, we can improve our individual water footprint by choosing more food with low water consumption and avoiding those that require a lot of precious blue water to irrigate in arid regions.

A truly inspiring video: Everybody of us can contribute his share to clean up our water resources and save the planet: 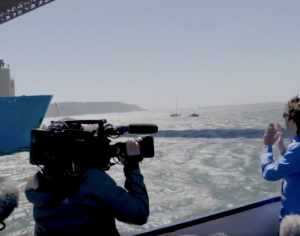