In previous posts, we have explored the importance of water, the oceans, and the world of great rivers. We have looked at the importance from different angles, explaining the complex interactions and interdependencies of the fragile ecosystem of our planet Earth, the planet that gives us life and tolerates the human being.

In this context we draw your attention to a video, produced by the Ocean Cleanup Initiative started by Boyan Slat:

In its strategic 14th Five-Year Plan, unveiled in March 2021, China mentions a mega dam project, which will have great impact on the whole of East-Asia, and, as a consequence, raises concern not only in the neighbouring countries India and Pakistan:

A dam of such magnitude will certainly not be without consequences for nature. With a length of 3,000 kilometers, the Brahmaputra is one of the most water-rich rivers in South-East-Asia. The Brahmaputra feeds the Ganges, which in turn is the lifeline of the Indian subcontinent.

The dam affects the interests of India, Tibet, Pakistan and Bangladesh, all of them political heavyweights in the region.

Many questions that need to be evaluated by a responsible leadership of planet Earth, and the questions need to be answered free from national and economic interests. What do you think, our readers and partners, what risks or opportunities do you see in this project?

We are looking forward to learning about your ideas and your opinion.

This article by NDTV about the Mega Dam Project is just one example out of a number of other media reports: 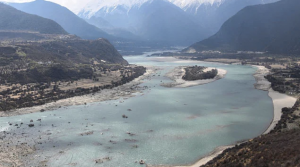 The structure will span the Brahmaputra River before the waterway leaves the Himalayas and flows into India, straddling the world’s longest and deepest canyon at an altitude of more than 4,900 feet.

Beijing: China is planning a mega dam in Tibet able to produce triple the electricity generated by the Three Gorges — the world’s largest power station — stoking fears among environmentalists and in neighbouring India.

The structure will span the Brahmaputra River before the waterway leaves the Himalayas and flows into India, straddling the world’s longest and deepest canyon at an altitude of more than 1,500 metres (4,900 feet). The project in Tibet’s Medog County is expected to dwarf the record-breaking Three Gorges Dam on the Yangtze River in central China, and is billed as able to produce 300 billion kilowatts of electricity each year.

It is mentioned in China’s strategic 14th Five-Year Plan, unveiled in March at an annual rubber-stamp congress of the country’s top lawmakers. But the plan was short on details, a timeframe or budget. The river, known as the Yarlung Tsangpo in Tibetan, is also home to two other projects far upstream, while six others are in the works or under construction.

The „super-dam“ however is in a league of its own. Last October, the Tibet local government signed a „strategic cooperation agreement“ with PowerChina, a public construction company specialising in hydroelectric projects. A month later the head of PowerChina, Yan Zhiyong, partially unveiled the project to the Communist Youth League, the youth wing of China’s ruling party.

Enthusiastic about „the world’s richest region in terms of hydroelectric resources“, Yan Zhiyong explained that the dam would draw its power from the huge drop of the river at this particular section.

Beijing may justify the massive project as an environmentally-friendly alternative to fossil fuels, but it risks provoking strong opposition from environmentalists in the same way as the Three Gorges Dam, built between 1994 and 2012. The Three Gorges created a reservoir and displaced 1.4 million inhabitants upstream.

„Building a dam the size of the super-dam is likely a really bad idea for many reasons,“ said Brian Eyler, energy, water and sustainability program director at the Stimson Center, a US think tank.

Besides being known for seismic activity, the area also contains a unique biodiversity. The dam would block the migration of fish as well as sediment flow that enriches the soil during seasonal floods downstream, said Eyler.

There are both ecological and political risks, noted Tempa Gyaltsen Zamlha, an environmental policy specialist at the Tibet Policy Institute, a think tank linked to the Tibetan government-in-exile based in Dharamshala, Himachal Pradesh. „We have a very rich Tibetan cultural heritage in those areas, and any dam construction would cause ecological destruction, submergence of parts of that region,“ he said. „Many local residents would be forced to leave their ancestral homes,“ he said, adding that the project will encourage migration of Han Chinese workers that „gradually becomes a permanent settlement”.

India is also worried by the project. The Chinese Communist Party is effectively in a position to control the origins of much of South Asia’s water supply, analysts say. „Water wars are a key component of such warfare because they allow China to leverage its upstream Tibet-centred power over the most essential natural resource,“ wrote political scientist Brahma Chellaney last month in the Times of India. The risks of seismic activity would also make it a „ticking water bomb“ for residents downstream, he warned.

In reaction to the dam idea, the centre has floated the prospect of building another dam on the Brahmaputra to shore up its own water reserves. „There is still much time to negotiate with China about the future of the super-dam and its impacts,“ said Mr Eyler. „A poor outcome would see India build a dam downstream.“